Unconsciousness and its dimensions further explored. The below passage is from C.G. Jung’s memoir ‘Dreams, Memories, Reflections’. It mentions the importance of recognizing ethically the symbols within our collective unconscious during childhood and through adulthood, and how it shaped our personalities and ways we view our external reality to which creates pattern if behavior/thought. Further more this passage discusses the subtle irrational sensation once one dives into their unconsciousness and meet the mythological archetypes within us all. This travel is described through Jung’s description of the Individuation Process. Read more on this in my ‘PSYCHOLOGY & TOOLS DOR SELF-DEVELOPMENT’ category. No words can describe the inner travel when we journey into the depths of our collective mind. There is no such thing of a sure road without mistakes on this spirit journey. Be mindful of your thoughts and what you can learn from them. Synchronicity is true, and pay attention to the contents of your dreams. Our unconscious is a religious infinity beyond time and space.

“Consciousness began its evolution from an animal-like state which seems to us unconscious, and the same process of differentiation is repeated in every child.” – C.G. Jung

“It is equally a grave mistake to think that it is enough to gain some understanding of the images [of the collective unconscious] and that knowledge can here make a halt. Insight into them must be converted into an ethical obligation. Not to do so is to fall prey to the power principle, not only to others but even to the knower. The images of the unconscious place a great responsibility upon a man. Failure to understand them, or a shirking of ethical responsibility, deprives him of his wholeness and imposes a painful fragmentariness on his life.”

“A characteristic of childhood is that, thanks to naïveté and unconsciousness, it sketches a more complete picture of the self, of the whole man in his pure individuality, than adulthood. Consequently, the sight of a child or a primitive will arouse certain longings in adult, civilized persons – longings which relate to the unfulfilled desires and needs of those parts of the personality which have been blotted out of the total picture in favor of the adapted persona.”

“What happens within oneself when one integrates previously unconscious contents with the consciousness is something which can scarcely be described in words. It can only be experienced. It is a subjective affair quite beyond discussion; we have a particular feeling about ourselves, about the way we are, and that is a fact which it is neither possible nor meaningful to doubt. Similarly, we convey a particular feeling to others, and that too is a fact that cannot be doubted. So far as we know, there is no higher authority which could eliminate the probable discrepancies between all these impressions and opinions. Whether a change has taken place as the result of integration, and what the nature of that change is, remains a matter of subjective conviction. To be sure, it is not a fact which is in practice uncommonly important and fraught with consequences. Realistic psychotherapists, at any rate, and psychologist interested in therapy, can scarcely afford to overlook facts of this sort.”

“When one follows the path of individuation, when one lives one’s own life, one must take mistakes into the bargain; life would not be complete without them. There is no guarantee – not for a single moment – that we will not fall into error or stumble into deadly peril. We may think there is a sure road, but that would be the road of death. Then nothing happens any longer – at any rate, not the right things. Anyone who takes the sure road is as good as dead.”

“One must accept the thoughts that go on within oneself of their own accord as part of one’s reality. The categories of true and false are, of course, always present; but because they are not binding they take second place. The presence of thoughts is more important than our subjective judgment of them. But neither must these judgments be suppressed, for they also are existent thoughts which are part of our wholeness.”

“The unconscious helps by communicating things to us, or making figurative allusions. It has other ways, too, of informing us of things which by all logic we could not possibly know. Consider synchronistic phenomena, premonitions, and dreams that come true.”

“The psyche at times functions outside of the spatio-temporal law of causality. This indicates that our conceptions of space and time, and therefore of causality also, are incomplete. A complete picture of the world would require the addition of still another dimension; only then could the totality of phenomena be given a unified explanation. Hence it is that the rationalists insist to this day that Parapsychological experiences do not really exist; for there world-view stands or falls by this question. If such phenomena occur at all, the rationalistic picture of the universe is invalid, because incomplete. Then the possibility of an other-valued reality behind the phenomenal world becomes an inescapable problem, and we must face the fact that our world, with its time, space, and causality, relates to another order of things lying behind or beneath it, in which neither “here and there” nor “earlier and later” are of importance. The least a part of our psychic existence is characterized by a relativity of time and space. This relativity seems to increase, in proportion to the distance from consciousness, to an absolute condition of timelessness and spacelessness.”

“Unconscious wholeness therefore seems to me the true spiritus rector of all biological and psychic events. Here is a principle which strives for total realization – which in man’s case signifies the attainment of total consciousness. Attainment of consciousness is culture in the broadest sense, and self-knowledge is therefore the heart and essence of the process. The Oriental attributes unquestionably divine significance to the self, and according to the ancient Christian view self-knowledge is the road to knowledge of God.”

“The feeling for the infinite, however, can be attained only if we are bounded to the utmost. The greatest limitation for man is the “self”; it is manifested in the experience: “I am only that!” Only consciousness of our narrow confinement in the self forms the link to the limitlessness of the unconscious. In such awareness we experience ourselves concurrently as limited and eternal, as both the only and the other. In knowing ourselves to be unique in our personal combination – that is, ultimately limited – we possess also the capacity for becoming conscious of the infinite, but only then.”

“Consciousness is phylogenetically and ontogenetically a secondary phenomenon. Just as the body has an anatomical prehistory of millions of years, so also does the psychic system. And just as the human body today represents in each of its parts the result of this evolution, and everywhere still shows traces of its earlier stages – so the same may be said of the psyche. Consciousness began its evolution from an animal-like state which seems to us unconscious, and the same process of differentiation is repeated in every child. The psyche of the child in its preconscious state is anything but a tabula rasa; it is already preformed in a recognizably individual way, and is moreover equipped with all specifically human instincts, as well as with the priori foundations of the higher functions.

One thought on “the Collective Unconscious further Explored” 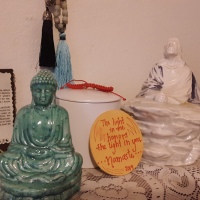 #Synchronicity still festinates me. The first photo is of my ‘ #alter of sorts’, and I happen to have both #Christ and #Buddha beside each other. I painted the Buddha a couple months ago at @theartsyfartsystudio in Yuma AZ, and the Christ ceramic piece was made by my maternal grandmother, whom resides in #Utah . I am not the one to call religious, but I believe in a higher power beyond our selves, and I listen to my intuition for it has NEVER led me wrong. Read more from #CGJung below, on #psyche and #religion . - #christianity #buddhism #Archetypesandthecollectiveunconscious - Christ and Buddha - “Christ – like Buddha – is an embodiment of the self, but in an altogether different sense. Both stood for an overcoming of the #world : Buddha out of rational insight; Christ as a foredoomed sacrifice. In Christianity more is suffered, in Buddhism more is seen and done. Both paths are right, but in the #Indian sense Buddha is the more complete human being. He is a historical personality, and therefore easier for men to understand. Christ is at once a historical man and God, and therefore much more difficult to comprehend. At bottom he was not comprehensible even to himself; he knew only that he had to sacrifice himself, that this course was imposed upon him from within. His sacrifice happened to him like an act of #destiny . Buddha lived out his #life and died at an advanced age, whereas Christ’s activity as Christ probably lasted no more than a year.” - “Later, Buddhism underwent the same transformation as Christianity: Buddha became, as it were, the image of the development of the self; he became a model for men to imitate, whereas actually he had preached that by overcoming Nidana-chain [a concentration of cause and effect] every human behind could become an illuminate, a Buddha. Similarly, in Christianity, Christ is an exemplar who dwells in every Christian as his integral personality. But historical trends led to the imitation Christi, whereby the individual does not pursue his own destined road to wholeness but attempts to imitate the way taken by Christ.."C.G.Jung,CollectiveWorks#3 - #insideasoul #wordpress #blogger #blog #bloggersofinstagram - Insideasoul.blog
A few more pics from #picachostaterecreationarea @jessegurrola - #hike #hiking #hikearizona #yumatrails #arizonahikingtrails #yumaarizona #picachocalifornia #hikearizona
Fun #hiking day in #picachostaterecreationarea . Didn't make it to the peak, though, but saw some cool canyons. @jessegurrola - #picachocalifornia #dayhike #hiking #memories #desertsouthwest #desertlife #yumaarizona #yumahikingtrails #arizonahikingtrails
#truestory #personalvalues #familyvalues #relationships #intimaterelationships #empowerment - Facebook page @val.180 #talesandinsightsfindingyourself #inspirationalquotes
Lol not bashing men, can say the same about women. It appears american society, the average, is about their image and an abundance of material possessions with visions of misconceived perceptions of success built on stacks of money or what can be to their advantage solely. Long sentence now cut short, values and genuine personality are now selective. Some are waking up to their authentic self while others have fallen into a dreamless sleep of conformity and confinement to a system built from illusion. It is time we wake up collectively - globally, even. - Are you awake? @quickmemes - P.S. sorry, not sorry, no #happyvalentinesday post from me. Just some #rawtruth - Check out my Facebook page @val.180 #talesandinsightsfindingyourself ' #selfdevelopment #selfawakening #spiritjourney #traditionalvalues #nuclearfamily #humor #humormemes #memes #americanlifestyle #americansociety #globalization
#tbt to last May. A life transition, a new job, a new opportunity to grow career wise and self wise as I began my path as a therapist and continued education to complete my MSW. I should have my Master's of Social Work through ASU @arizonastateuniversity this may. Also, last year was transitional too as I grew more self wise and began to leave my comfort zone as i completed Yoga Teacher training @bewarriorsyoga , and then taught briefly @humanequationwellness . All these experiences have and continue to assist in my Self-development and getting me out of my comfort zone. @write_to_empower has also been transitional and connected me back to writing and meditating regularly. - #progress #selfdevelopment #yogateacher #lifetransitions #collegelife #asu #msw #socialscience #socialwork #socialworker #clinicalsocialworker #therapy #therapist #childandfamilytherapist #childandfamilytherapy
%d bloggers like this: