“Insofar as the God-image is, from the psychological point of view, a manifestation of the ground of the psyche, and insofar as the cleavage in that image is becoming clear to mankind as a profound dichotomy which penetrates even into world politics, a compensation has arisen. This takes the form of circular symbols of unity which represent a synthesis of the opposites within the psyche. I refer to the worldwide rumors of Unidentified Flying Objects.”

“I prefer the term “the unconscious,” knowing that I might equally well speak of “God” or “daimon” if I wish to express myself in mythic language. When I do use such mythic language, I am aware that “mana,” “daimon,” and “God” are synonyms of the unconscious – that is to say, we know just as much or just as little about them as about the latter. People only believe they know much more about them – and for certain purposes that belief is far more useful and effective than scientific concept. The great advantage of the concepts “daimon” and “God” lies in making possible a much better objectification of the vis-à-vis, namely, a personification of it. Their emotional quality confers life and effectuality upon them. Hate and love, fear and reverence, enter the scene of the confrontation and raise it to a drama. What has merely been “displayed” becomes “acted”. The whole man is challenged and enters the fray with his total reality. Only then can he become whole and only then can “God be born,” that is, enter into human reality and associate with man in the for of “man.” By this act of incarnation man – that is, his ego – is inwardly replaced by “God,” and God becomes outwardly man, in keeping with the saying of Jesus: “Who sees me, sees the Father.””

“The Word happens to us; we suffer it, for we are victims of a profound uncertainty: with God as a complexio oppositorum, all things are possible, in the fullest meaning of the phrase. Truth and delusion, good and evil, are equally possible. Myth is or can be equivocal, like the oracle of Delphi or like a dream. We cannot and ought not to repudiate reason; but equally we must cling to the hope that instinct will hasten to our aid – in which case God is supporting us against God, as Job long ago understood. Everything through which the “other will” is expressed proceedings for man – his thinking, his words, his images, and even his limitations. Consequently, he has the tendency to refer everything to himself, when he begins to think in clumsy psychological terms, and decides that everything proceeds out of his intentions and out of himself. With childlike naïveté he assumes that he knows all his own reaches and knows what he is “in himself.” Yet all the while he is fatally handicapped by the weakness of his consciousness and the corresponding fear of the unconscious. Therefore, he is utterly unable to separate what he has carefully reasoned out from what has spontaneously flowed to him from another source. He has no objectivity toward himself and cannot yet regard himself as a phenomenon which he finds in existence and with which, for better or worse, he is identical. At first everything is thrust upon him, everything happens to him, and it is only by great effort that he finally succeeds in conquering and holding for himself an area of relative freedom.”

“Only when he has won his way to this achievement, and then only, is he in a position to recognize that he is confronting his instinctive foundations, given him from the beginning, which he cannot make disappear, however much he would like to. His beginnings are not by any means mere pasts; they live with him as the constant substratum of his existence and his consciousness is as much molded by them as by the physical world around him.”  C.G. Jung, Collective Works, vol. 3 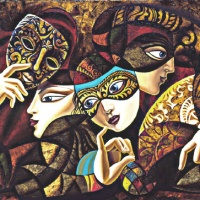