Below is some information related to Hoover Dam. I also posted some of my own pictures from my trip.

“Built during the Depression; thousands of men and their families came to Black Canyon to tame the Colorado River. It took less than five years, in a harsh and barren land, to build the largest dam of its time. Now, years later, Hoover Dam still stands as a world-renowned structure.”

Location: The dam is located 30 miles southeast of Las Vegas.

Here are some “essays” written primarily by tour guides at Hoover Dam, related to the history of Hoover Dam construction and such. Click the Hyperlink for more information:

Snip bit from the Essay “Artwork”:

“Much of the sculptures is the work of Norwegian-born, naturalized American Oskar J.W. Hansen. Hansen’s principal work at Hoover Dam is the monument of dedication on the Nevada side of the dam. Here, rising from a black, polished base, is a 142-foot flagpole flanked by two winged figures, which Hansen calls the Winged Figures of the Republic. They express “the immutable calm of intellectual resolution, and the enormous power of trained physical strength, equally enthroned in placid triumph of scientific accomplishment.”

“Hoover Dam, said Hansen, represented for him the building genius of America, “a monument to collective genius exerting itself in community efforts around a common need or ideal.” He compared the dam to such works as the great pyramids of Egypt, and said that, when viewing these man-made structures, the viewer often asks of their builders, “What manner of men were these?”

“The sculptor, according to Hansen, tries to answer this question objectively, by “interpreting man to other men in the terms of the man himself.” “In each of these monuments,” he said, “can be read the characteristics of these men, and on a larger scale, the community of which they are part. Thus, mankind itself is the subject of the sculptures at Hoover Dam.

“The building of Hoover Dam belongs to the sagas of the daring. The winged bronzes which guard the flag, therefore, wear the look of eagles. To them also was given the vital upward thrust of an inspirational gesture; to symbolize the readiness for defense of our institutions and keeping of our spiritual eagles ever ready to be on the wing.

“Hansen also designed the plaque commemorating the 96 men who officially died during the construction of Hoover Dam, as well as the base-relief series on both the Nevada and Arizona elevator towers. The plaque, originally set into the canyon wall on the Arizona side of the dam, is now located near the winged figures on the Nevada side. It reads:

For more information on the Artwork at Hoover Dam, click here: Artwork

Pictures from my Hoover Dam trip:

View of one of the statues and the flag:

Inscription on black diorite base the flag is supported on: 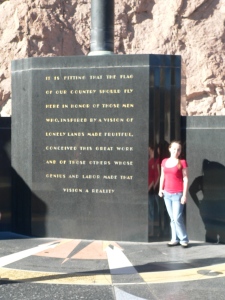 Inscription reads: It is fitting that the flag of our country should fly here in honor of those men who, inspired by a vision of lonely lands made fruitful, conceived this great work and of those others whose genius and labor made that vision a reality.

Rub the toes of the statues for good fortune: 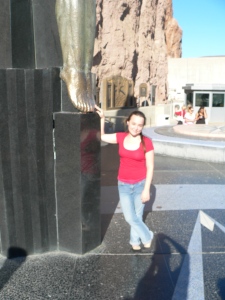 More images of the artwork surrounding the statues: 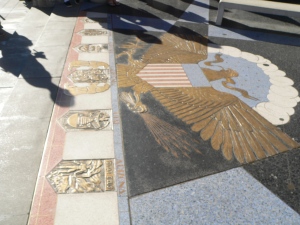 For information on the artworks, check out the essays on the Hyperlink over “Artwork”.

The Hoover Dam bypass bridge the highest and longest arched concrete bridge in the Western Hemisphere: 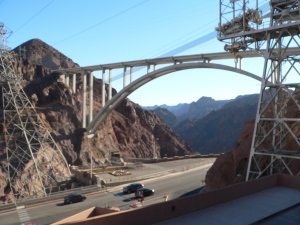 Long way down… Looking down from the top was a bit of a rush for me, since I have a fear of heights, while at the same time it was very calming and may have even helped me to begin overcoming my fear. Baby steps:

View of the power plants:

A view of the lake side of the dam (only a ‘tip’ of Lake Mead) and ‘white rock’ (white due to salt remains from evaporating water over long period of time):

My friend and I didn’t do any of the tours, so no pictures of inside the power plants, but for more in depth information related to Hoover Dam, look at the Hyperlinks! Thanks for viewing!

Upcoming posts: Trekking through the canyons 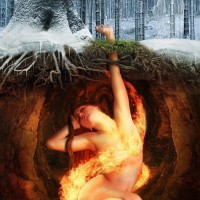